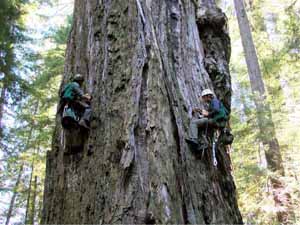 Tallest trees refer to the height of the tree. In August 2006, a new “tallest tree in the world” was found. It was found in a California redwood, and it’s location was Redwood Forest ( Redwood National Park, California). This tree has been named “Hyperion” (from Greek mythology) and stands 115.61 meters (379.3 feet) tall! The Coast Redwood is probably the tallest tree on earth, although one occasionally hears of extraordinarily tall eucalypts in Western Australia, and during historical times there have been Douglas-firs (Pseudotsuga menziesii) recorded as being taller than any Coast Redwoods now living. However, it is quite likely that the tallest Coast Redwoods were early victims of the axe, so it is difficult to say if the Redwood was the tallest of conifers during early historical time.

In order to protect these trees precise location of these trees are not shown anywhere and should remain secret.