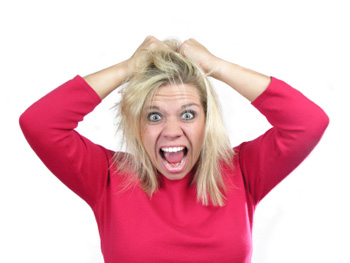 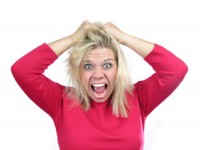 Have you been afraid of something even if others say there is no basis for that fear? What do you usually do when you are frightened of something? Do you become troubled, disturbed or apprehensive? If you are in this position, then you might be having panic attacks.
Fear is a feeling which must be carefully distinguished from anxiety. While both fear and anxiety may show themselves in similar reactions and feelings and even bodily changes, the difference is considerable. Fear arises out of a real experience, for instance, being threatened by a wild animal or being caught in a burning building or a sinking ship. Anxiety arises from subconscious feelings or emotional reactions without any real danger or threat being present.

Fear invariably manifests itself in bodily changes. Here are some of the most common things your body encounters while you fear something else:

1. Your adrenal glands may produce enormous amounts of adrenalin;
2. Your stomach and intestines, may stop working;
3. Your heart may increase its rate; and
4. Your breathing may become more rapid.

Fact #2: How do Scientists view Fear?

Many modern scientists see fear as the attempt on the part of the total organism, man or animal:

1. to prepare itself for flight
2. to fight, to run away
3. to stand and fight back wildly and desperately.

Fact # 3: Fear on a Psychologist’s Point of View

The reactions to stimuli are life-saving instances for the young infant whose underdeveloped nervous system cannot tolerate extremes of stimulation for a prolonged period. Many psychologists believed that this reaction to such stimuli in the newborn is the basis for fearful reactions expressed throughout the early years of life and extending far into childhood. Parental attitudes play a decisive role in a child’s way of expressing fear.

Phobia is characterized by an overwhelming fear of special situations such as wide open spaces or closed ones, animals, dark, nights, or falling. Most people have relatively inconsequential fears of this type but in some, these fears become so overwhelming that they interfere with normal life and behavior.

Fear may be attached to objects that are often harmless in themselves but which subconsciously represent feelings that are the true source of the problem. The person, to keep her subconscious feelings from coming into the conscious, may displace or project his fear onto the outside world as a phobia. Thus, being alone or in a high spot may represent abandonment to the sufferer, and the person can hide the connection between the subconscious feelings and the phobia. In effect, the phobic person seeks to blame the world instead of his inner problem for his phobia.

Fear is often tied to guilt feelings. Many of these guilt feelings are similar to phobic feelings in that they are both subconscious. Sexual impotence and frigidity often have their real origin in subconscious guilt which is expressed in the fear of the sexual act. In these cases, early parental disapproval of sexuality in general leads to guilt feelings about sex and adversely affects the individual’s adult attitude and behavior.

Since these feelings may go deep into the personality, treatment may be difficult and complicated. Psychotherapy has proved successful when it involves the whole personality and not just the symptom of fear alone. The new behavior therapy tries to defuse or desensitize the fear.

As you look into all these facts about far, you seem to realize what is getting into you lately. If there is anything you are afraid of, you should seek the help of your immediate family. Talk to someone you love. If not, go immediately to your psychiatrist. Please have the time for consultation and therapy or your panic attacks will worsen.

2 thoughts on “Six Facts about Fear and Panic Attacks”