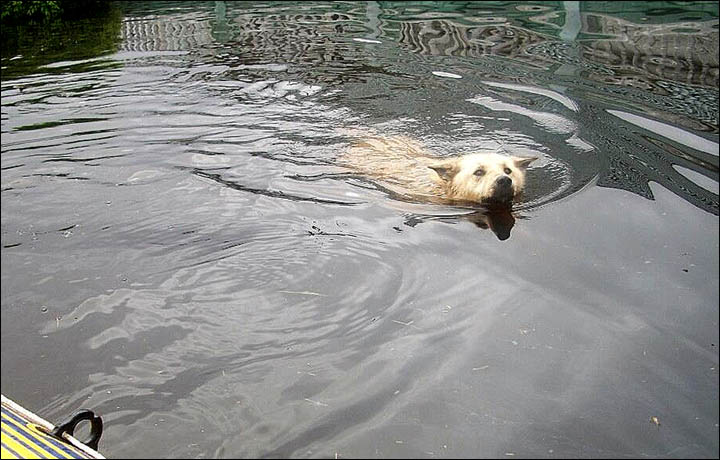 It happened this summer in Eastern Russia. Druzhok – his name means “Little Friend” – was rescued once but swam back to do his duty on the doorstep of the waterlogged house. Druzhok became a symbol of the flooding which has devastated an area of the country almost as large as Texas and California combined. The Andreev family home in Amur region is one of thousands submerged by the worst floods in 120 years. It is forecast as many as 100,000 maybe evacuated in the crisis. 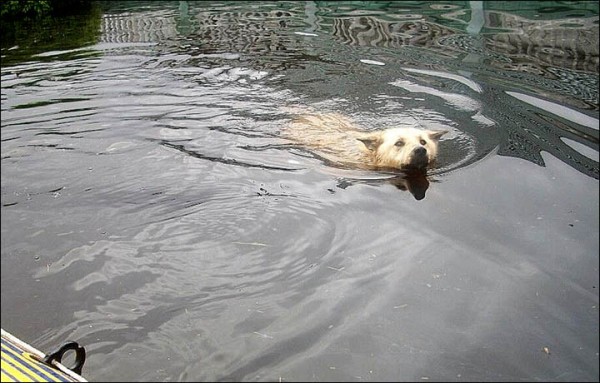 Druzhok escaped with the Andreevs when the village of Vladimirovka suddenly and dramatically turned into a sea. The family members went to stay in a flat with relatives, and the dog was left outside guarding their car. But after three days, he vanished, to be found later back on the doorstep trying to keep this wet intrusion out of the Andreev home, holding back the tide. 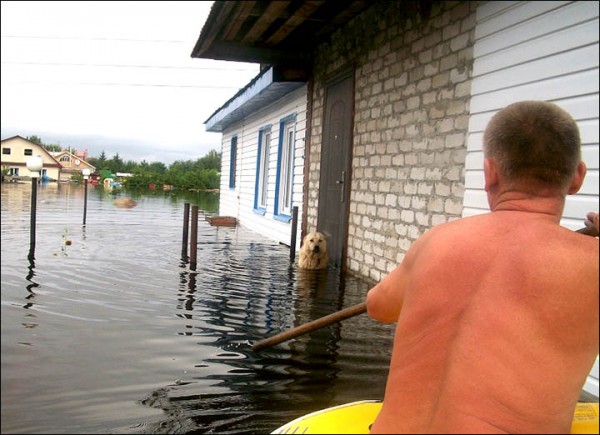 ‘We did not have time to save any belongings,’ said Druzhok’s owner Yelena. ‘The flood started like the war at 4 am. My husband Vladimir came and said: ‘It’s time to go. We took Druzhok and went off. We drove to the hill and just stood there: where to go next? To whom? Where to live? ‘In the end, we went to stay with our relatives. But they have an apartment on the 5th floor and Druzhok is not a small dog, plus he is used to living outside. So we had to leave him and our truck next to our not yet flooded neighbours. Every day we came to see and feed him and everything was normal. People looked after him. ‘He guards the truck, does not let strangers to come close, and sleeps underneath it’, they told us. 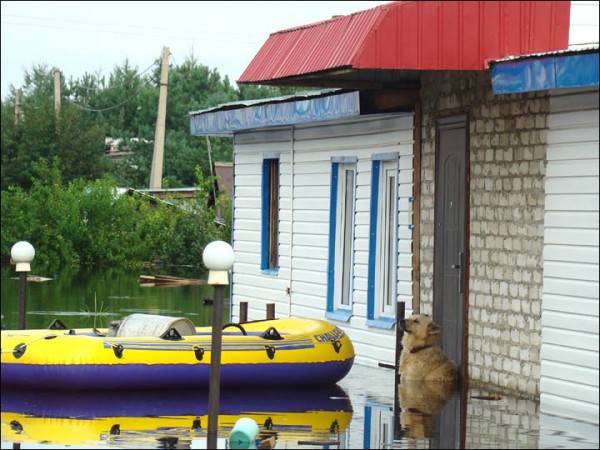 ‘On the third day we came in the morning but Druzhok was not there. We rushed to look for him, then took a boat and sailed to our flooded house. We heard him barking there. ‘Then we saw some rescuers sailing toward us. ‘Is it your dog?’ they asked. ‘He won’t allow us into the house and refuses to let us take him to safety’. 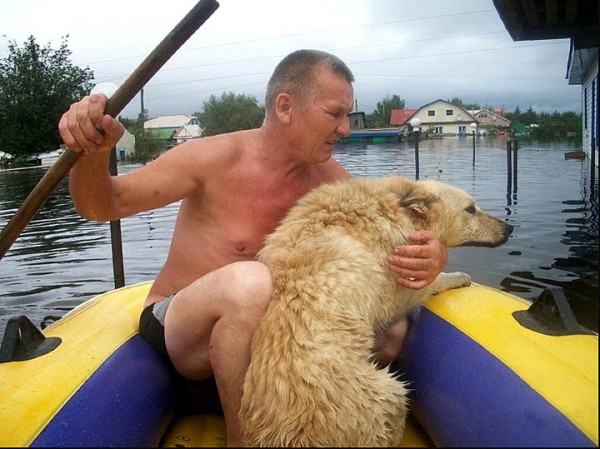 Elena said the four year old dog had swum back at night, perhaps thinking his family – the couple live with their son, daughter and granddaughter – had returned and needed guarding.

‘And it is deep here. He could not run, he had to swim. The dog stood on the top step of the porch in the cold water all night’. 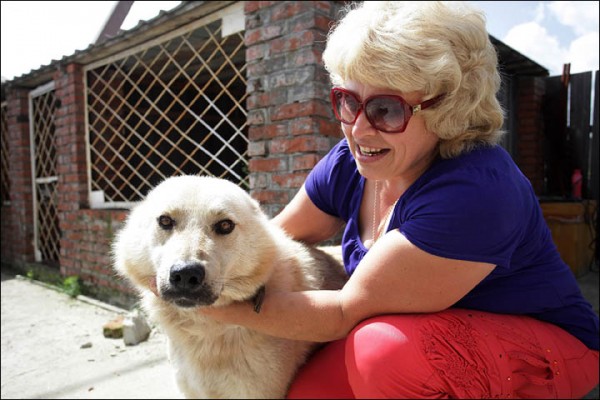 Holding back her tears, she said: ‘We sailed into the yard and saw him. He was standing there and trembling, but wouldn’t move away from his place. But when he saw us he was so happy. We took him into the boat and he rushed to lick us. We all were so happy.’ 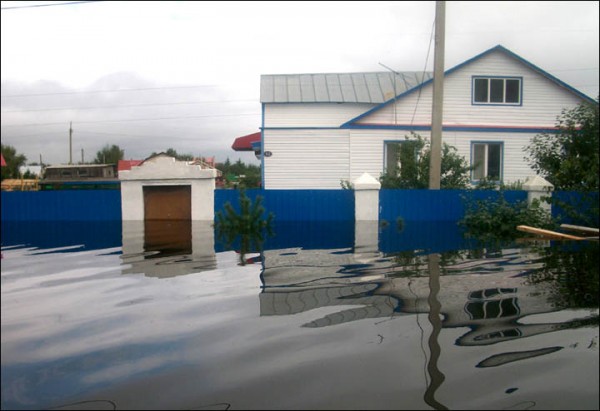 After such stress, they decided not to leave him alone. ‘It is simply unbearable to think that he is here alone. The water is rising. If he goes back to the house, he might not be able to stand on the porch or will not have enough strength to swim back. Our friends had an empty aviary, and we asked to put our dog there, and they invited us to come and live with them’. 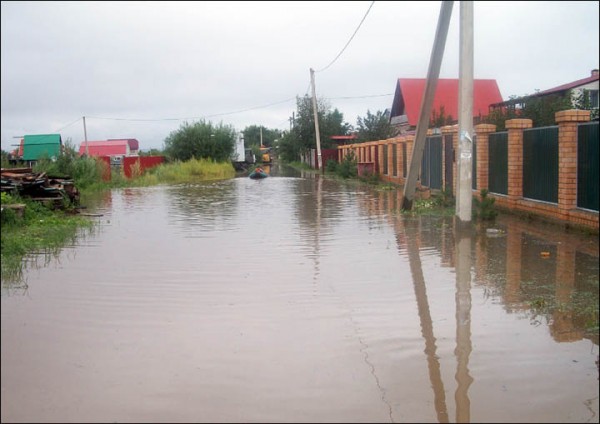 Druzhok’s name came to light when Elena posted the ‘Druzhok Rescue Operation’ on his own social network page.

‘People started writing from all over the world and offered help,’ she said. 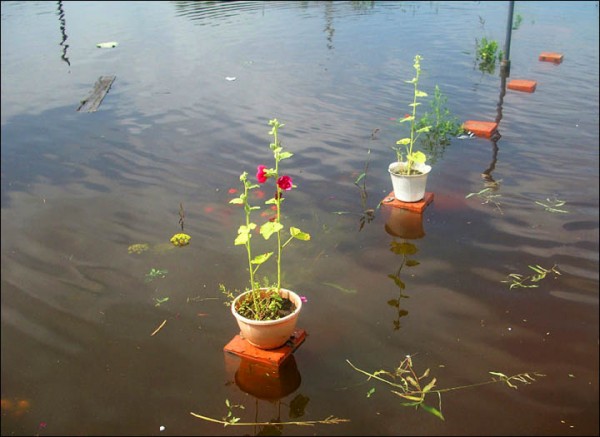 Druzhok came to the Andreev family four years ago, a puppy brought by a friend, a cross between a Caucasian Shepherd and a stray. 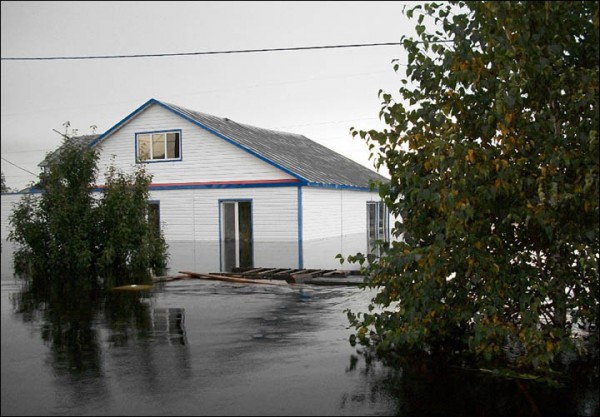 ‘He’s a very smart boy,’ she said, stroking the heroic animal. ‘Nobody taught him, he grew up clever by himself. He understands everything. He senses if my husband or daughter from a 10km distance and starts barking, telling me to heat the soup. But if he wants to run around, no chain will stop him. He will tear it and run away. And when he had enough he comes and shows the neck like saying leash me, I’m ready’.

or Shop Amazon – Savings in the Dog Store

1 thought on “The incredibly loyal dog”