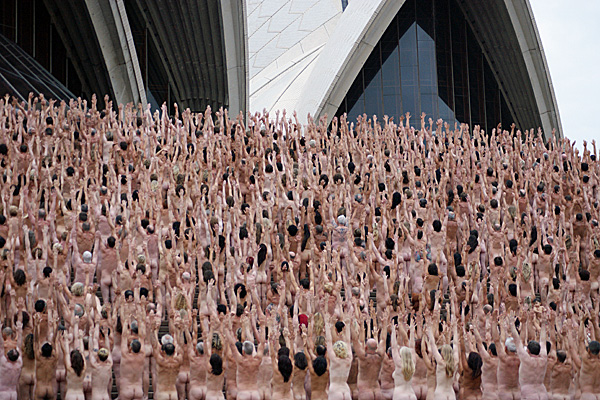 Some 5,200 Australians posed naked in front of the Sydney Opera House on Monday for a photo shoot by New York-based artist Spencer Tunick for another signature installation of nudes against urban backdrops.
A section of the 5,200 participants taking part in the nude installation by artist Spencer Tunick poses on the front steps of the Sydney Opera House on Monday. On a chilly, overcast, first day of autumn, the mass nude photo shoot was titled ‘Mardi Gras: The Base’ and meant to celebrate Sydney’s Gay and Lesbian Mardi Gras last weekend.

As the sun rose, Tunick instructed participants to do a number of poses, from standing up, lying down, and even embracing cheek to cheek, for over an hour.“I want all couples to embrace and kiss, all friends to kiss and all strangers to do whatever they want,” Tunick said as he directed the crowd.
The event drew double the expected turnout and was timed to coincide with Sydney’s annual Gay and Lesbian Mardi Gras Parade on Saturday.“Gay men and women lay naked next to their straight neighbours and this delivered a very strong message to the world that Australians embrace a free and equal society,” Tunick said.
About half of the 5,200 models were also photographed inside the concert hall.
Some participants were surprised at how asexual, and levelling, the event was.