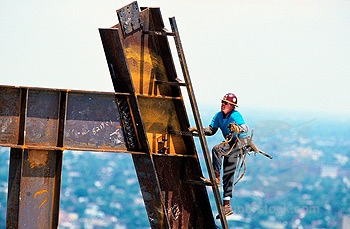 If you think your job is bad, think twice… unless you’ve got one of the “worst” jobs in America today. It isn’t much of a surprise that many of these low-rated jobs overlap with the most dangerous jobs. What’s more, none have an annual salary above $40,000. JobsRated.com has released a comprehensive ranking of the worst occupations, based upon several key criteria, including salary, stress and physical demand. What are the ten worst jobs in the country?

This job requires you to work with hot metal, usually at great heights and for little reward. The Bureau of Labor Statistics lists the median hourly income of Iron Workers below $20. Work can be irregular at times, because of bad weather, the short-term nature of construction jobs and economic downturns. Beware: This job category has the fourth-highest fatality rate in the country, at 61.0 deaths per 100,000 workers.

If you’re not sure what a Roustabout is, you’re probably not alone. A relatively specialized field, roustabouts perform maintenance on oil rigs and pipelines, using hand and power tools. The BLS expects the demand for roustabouts to decline slowly over the next decade. Median Salary: $29,000

The job of a welder involves melting metal joints together, usually behind a protective mask and visor to prevent serious injury. The BLS says only the top 10 percent of welders earn above $22.50 an hour.

No need to describe this one. Although wages vary significantly based upon experience and responsibilities, the BLS lists median hourly earnings at just $13.93. Garbage collectors also rank as the sixth deadliest job in America, with a fatality rate of 41.8 per 100,000 jobs.

The BLS reports that most job openings in this field “arise from the need to replace those who leave the occupation because the work is hot, strenuous, and dirty, causing many people to switch to jobs in other construction trades.” With a median hourly wage of $15.51, being a high-flying roofer is still near the bottom of the barrel.

People’s lives often depend on EMTs and other first responders, so they’re on-call 24 hours a day, which tends to result in quite irregular hours. Although wages vary by region, median annual pay is $27,070, according to the Bureau of Labor Statistics.

A broad category, it includes boat workers and fishermen, who tend to spend long periods of time at sea in cramped circumstances and poor weather conditions. Fishermen also have the deadliest job in the country, with a 141.7 fatality rate per 100,000. Not the kind of odds most people would take for a median salary of $34,000 per year.

Although many taxi drivers and chauffeurs have extremely flexible schedules and generally work unsupervised, the job still ranks near the bottom. The BLS estimates there are approximately 229,000 jobs of this nature in the country. Although wages vary greatly based on location, type of company and amount of tips, the median hourly wage is $10.62.

Raising cattle for milk production entails strenuous labor, long hours and poor working conditions, Various government estimates put net income at just over $15,000 a year. Wages do not include government subsidies and can vary with fluctuations in commodity prices and market demand.

That’s right, being a Lumberjack is the worst job in America, based upon the study by JobsRated.com. These workers spend all their time outdoors, in poor weather, and often in isolated areas. It’s also the third most deadly occupation with a fatality rate of 82.1 per 100,000 jobs per year. Long hours, a high -stress environment, strenuous work and low pay – often starting at minimum wage, with a median hourly wage at $13.80 – all contribute to make this the #1 worst job in the country.