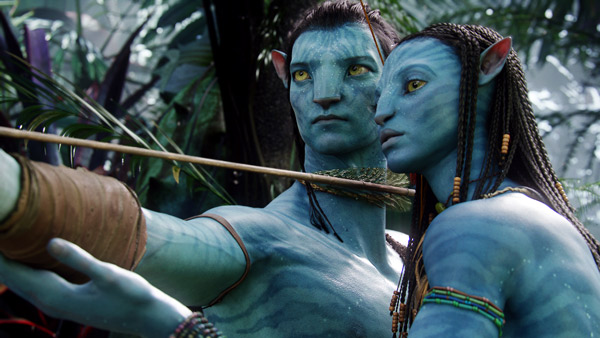 According to estimates from Hollywood.com Box Office, James Cameron’s sci-fi opus grossed $68.3 million over New Years weekend, a tiny 10 percent drop from Christmas weekend for a $352.1 million domestic total. Easily the biggest third weekend in the U.S. ever (2002’s “Spider-Man” had held the record with $45 million). Only the director of  “Titanic” could create another worldwide sensation of this magnitude. “Avatar“, in just 17 days, has surpassed $1 billion in the global box office. “Avatar” was positioned to hold up well for an event picture due to its pre-Christmas release. While frequently the most bustling time of the year, December is not the month for opening weekend records, because business is spread throughout the week over the holidays. Avatar director James Cameron’s last picture, Titanic, was the extreme example of this, opening to a sensational $28.6 million on the same weekend in 1997 and then growing 24 percent over Christmas weekend. Titanic, of course, was a legendarily unique phenomenon that ran at blockbuster levels for months, ultimately becoming the highest-grossing movie ever at $1.842B in the global box office.

Worldwide Top 5 is as follows:

2 thoughts on “Avatar – worldwide sensation hitting $1.022B worldwide and climbing”