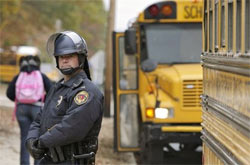 Parents of teens understand being kept in the dark as their teens begin to strive for more independence from their parents. While this may be a natural part of growing up, it doesn’t mean that parents should be in the dark about their children’s schools. It may surprise you to learn about the educational statistics, condition of the school buildings, teacher salaries, and even the safety of teens at Americans high schools.

From funding issues to under-educating students to innovative ways to reach at-risk students, the following facts all revolve around high school education.

From date rape to firearms at school to bullying, read about these facts surrounding teen safety.