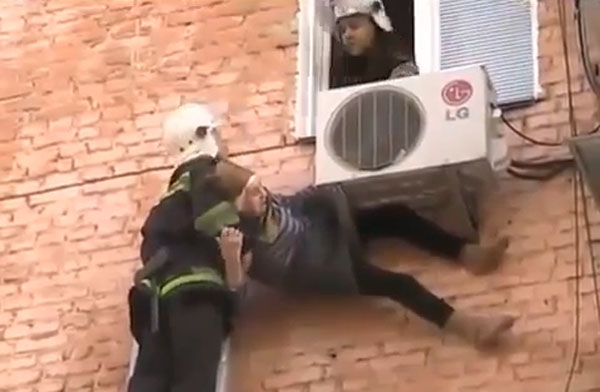 Old on for dear life! 97-year-old woman left dangling 35ft above the ground after slipping as she cleaned her fourth-floor windows. A 97-year-old grandmother was left clinging to an air conditioning unit for half an hour after she slipped while cleaning windows.
Ukrainian Angela Artyomova was left hanging 35 feet above street level, suspended from the fourth floor, after her topple.

But the spritely pensioner managed to grab hold of an air conditioning unit at her flat at Rivne in the Ukraine after the fall, and then get her foot wedged in the bracket holding it in place.

Her terrified calls for help were enough to alert passers by who called firemen, and she was still hanging on by the time firemen arrived and rushed to get a ladder underneath her to help her back inside.

Fire brigade officials said they had realised the situation was desperate when they arrived and had no time to set up an air cushion.

They used a ladder to speedily get to the OAP – who had been hanging for at least 30 minutes before she was helped back inside.

The grandmother was taken to hospital suffering from shock.