The Top 10 New Species described in 2010 – EpidemicFun.com Skip to content

Each year the International Institute for Species Exploration announces a list of the Top 10 New Species for the preceding calendar year. The Institute’s planet-wide new species include an iron-oxide eating microbe that was discovered forming icicle-shaped “rusticles” on the legendary shipwreck, the Titanic. There’s also a two-meter-long fruit-eating lizard from the Philippines; a cricket that pollinates a rare orchid in the Mascarene Archipelago in the Indian Ocean; a jumping cockroach from South Africa and two very distinct fungi.

The Top 10 New Species described in 2010 are listed below:

This orb-weaving spider builds the largest orb-style webs that are known to science. Webs of this species have been found spanning rivers, streams and lakes with “bridgelines” reaching up to 25m in length and total web size reaching up to 2.8m2. The silk spun by these spiders has an average toughness of 250MJ/m3 with the highest measured at 520MJ/ m3. This makes it, “the toughest biological material ever studied, over ten times stronger than a similarly-sized piece of Kevlar” and more than two times stronger than any other known spider silk. The unusual behaviors of this new species will allow us to understand size dimorphism, mate guarding, and self castration (among others). Also discovered in association with Darwin’s bark spider was an undescribed symbiotic fly species.

This new species, collected from some of the last remaining Atlantic forest habitat near São Paulo, Brazil, emits very bright yellowish green light 24 hours per day from its gel-covered stems. DNA sequences of this species (from 5 gene regions) are helping us to understand the origin and evolution of bioluminescence in the fungi. Of the estimated 1.5 million species of fungi on earth, only 71 species are known to be bioluminescence and Mycena luxaeterna is one of the most visually striking species.

This new species of iron-oxide consuming bacteria was discovered on a rusticle from the RMS Titanic. Studies show that it sticks to steel surfaces creating knob-like mounds of corrosion products that have contributed, along with other microorganisms, to the deterioration process of the Titanic’s metal. This will eventually lead to the Titanic’s disappearance. This bacterium could be useful to perform studies related to the disposal of old naval and merchant ships that have sunk in the deep ocean.

This is a large arboreal frugivorous lizard of the genus Varanus and can only be found in the Northern Sierra Madre Forest, Luzon Island, Philippines. The forest monitor lizard can grow to more than 2 meters (6.6ft) in length but weighs only about 10 kilograms (22lb). It is brightly colored with stripes of gold flecks. Its scaly body and legs are a blue-black mottled with pale yellow-green dots and its tail is marked in alternating segments of black and green. It is quite astounding to think that something this size has eluded biologists that surveyed the area possibly because it spent most of its time in trees. However, it was known to the local hunters and is already a flagship for conservation in the Philippines.

This species is the only pollinator of the rare/endangered orchid Angraecum cadetii on Réunion island (South Western Indian Ocean), representing the first clearly-supported case of orthopteran-mediated pollination in flowering plants. 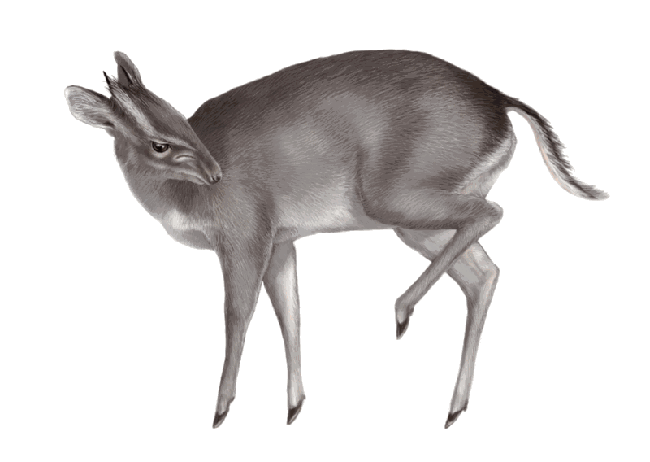 This new duiker from West Africa was first encountered at a bushmeat market. It is a surprising find because, “The discovery of a new species from a well-studied group of animals in the context of bushmeat exploitation is a sobering reminder of the mammalian species that remain to be described, even within those that are being exploited on a daily basis for food or ritual activities.” The taxonomic description of Philantomba walteri should facilitate research into its ecology and behaviour, as well as its conservation.

This T. rex leech was discovered feeding from the nasal mucous membrane of a little girl in Perú. It is unusual because it is the only known species of leech with a “single armed jaw with such large teeth.”

This new species of cockroach exhibits unusual morphology. It has legs that are highly modified for jumping. Prior to its discovery jumping cockroaches were only known from the Late Jurassic. This extant cockroach has jumping ability that is on par with grasshoppers. In addition to the leg modifications, it has hemispherical shaped eyes that protrude from the sides of the head instead of kidney shaped and the antennae have an additional fixation point to help stabilize them during jumping.

This species was discovered just before the Gulf of Mexico oil spill in 2010 and its entire known distribution is in the region of the spill. It is also a remarkably hideous (in a good way) animal. It is flat like a pancake, spikey, hops on its fins and has huge bulging eyes. Its discovery and precarious existence due to the oil spill was the lead article on CNN and a number of other outlets.

Check out and this species i described in my garden My new Neighbors – a Swarm of Bees.