The South Korean team have been crowned fastest texters in the world. The team of 18 year old Yeong-Ho Bae and 17 year old Ha Mok-Min went thumb-to-thumb against competitors from more than a dozen countries to win the title in a competition today in New York City.

Americans 16-year-old Kate Moore, of Des Moines, Iowa, and 14-year-old Morgan Dynda of Pooler, Ga. took second place. An Argentinean team came in third and a Brazilian team took fourth.
The LG Mobile World Cup is now an annual event, and competitors from around the world will compete. The event starts with a whole series of national contests. The winners meet in regional championships, and then, the winners of the regionals meet in the LG Mobile World Cup for the title of the World’s Fastest Texter.
The event gives participants a chance to show off how insanely fast they can be at text messaging… keeping in mind they’ll want to make as few mistakes as possible!
The LG Mobile World Cup challenges nimble-fingered teens on both speed and accuracy. The two-person winning team takes home a $100,000 prize. 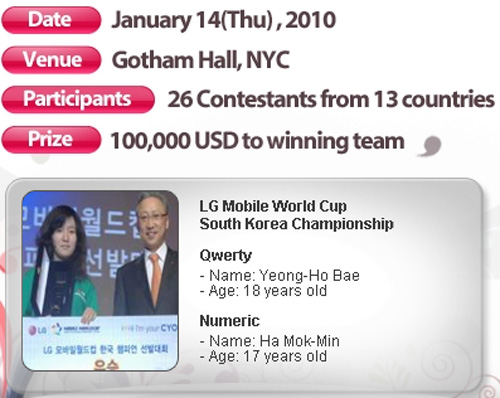