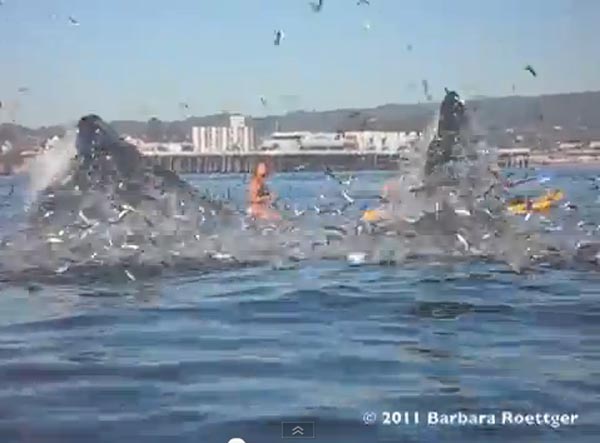 A woman floating on a surfboard near Santa Cruz, California almost ended up on the lunch menu for a humpback whale over the weekend. Barb Roettger had her camera rolling as two hefty whales popped out of the calm waters not far from the unsuspecting surfer and a pair of kayakers.
A pod of humpback whales has been hanging out off the Santa Cruz coast, noshing on anchovies that flock to the area to feed on plankton. The woman found herself in the middle of a feeding frenzy called lunge feeding, which occurs when whales herd anchovies and shoot straight up out of the water with their mouth wide open to catch the fish.

The whales have had quite a few dangerous close encounters with humans and boats in recent months. Whale watchers are warned to stay at least 100 yards away from the feeding area. Roettger says she has now gained a greater respect for whales, their feeding patterns and will now only spectate from the decidedly safer dry land.