Unexplainable “Crop” Circle on the ice in Norway – EpidemicFun.com Skip to content 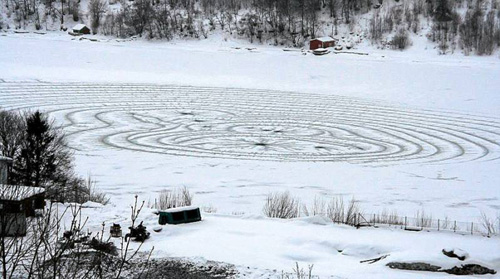 A 77 years old Ole Johan Hansen from Arna, outside Bergen in the west of Norway, saw a mystic light out on the lake one evening, about 6ft wide, unlike anything he had seen before. He could spot no one with his binoculars, and due to the risk of falling through the ice, he did not investigate until the day after. The following day, a strange, symmetric pattern covered the lake.

For years, farmers and other pranksters fooled the world with their crop circles. It’s now time to introduce the world to something new? Was this strange formation which appeared on top of the ice a supernatural phenomena created by those little white lights or something man made? Could this formation of sorts have been created by naturally occurring conditions which has not been seen by the likes of people?

A crop circle is an art form presented as a sizeable pattern created by the flattening of a crop such as wheat, barley, rye, or maize. The term crop circle entered the Oxford Dictionary in 1990. In 1991, self-described pranksters Doug Bower and Dave Chorley claimed that they started the crop circle phenomenon in 1978.

5 thoughts on “Unexplainable “Crop” Circle on the ice in Norway”