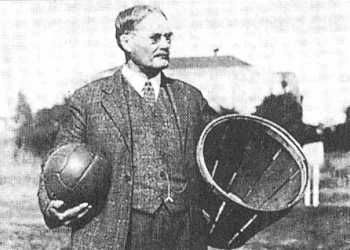 The first official game was played in the YMCA gymnasium on January 20, 1892 with nine players. The game ended at 1-0; the shot was made from 25 feet (7.6 m), on a court just half the size of a present-day Streetball or National Basketball Association (NBA) court.
It all started in early December 1891 when James Naismith get orders from Dr. Luther Gulick, head of Physical Education at the School for Christian Workers. James Naismith had 14 days to create an indoor game that would provide an “athletic distraction” for a rowdy class through the brutal New England winter.
James Naismith devised a set of thirteen rules of basketball:

In addition to the creation of the basketball, James Naismith graduated as a medical doctor, primarily interested in sports physiology and what we would today call sports science and as Presbyterian minister, with a keen interest in philosophy and clean living. Naismith watched his sport, basketball, introduced in many nations by the YMCA movement as early as 1893. Basketball was introduced at the Berlin Olympics in 1936. Naismith was flown to Berlin to watch the games. He died in Lawrence, Kansas, in 1939.

Today basketball has grown to become one of the world’s most popular sports.