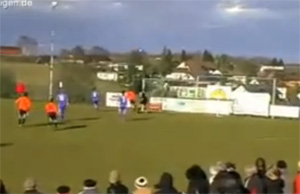 In the second half of a real match between German lower division sides TSV Wimsheim and TSV Grunbach last Sunday, a Grunbach player attempted to launch a booming kick against the intense winds only to have the ball hang in the sky and come right back the way it came, bounce high over the goalkeeper’s head and into the net, giving Wimsheim a 1-0 lead.

Wimsheim would go on to win 2-1, but if you’re Grunbach, I think you just have to accept that the universe was against you that day and move on. Or consider that Newton’s Laws of Motion weren’t a joke.

2 thoughts on “Strong wind scores an own goal – video”