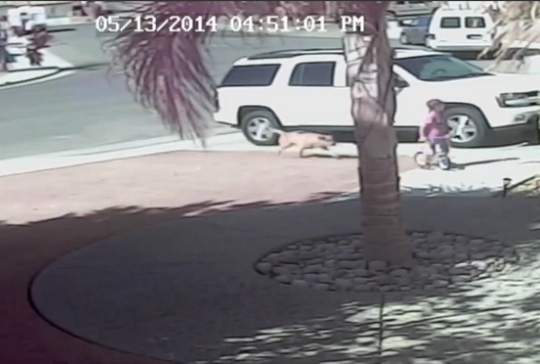 A boy and his mother were in their front yard, playing and watering the plants. The neighbor’s dog was let out of its backyard enclosure, seemingly by accident. The dog spotted the boy from across the yard and stalked up behind him. The boy never saw the attack coming. The dog clamped on to his leg and began dragging the boy. That’s when the family’s cat took action.

Responding police officers stated that if this had been their own son, the call response would have been for “Shots fired.”

MOM UPDATE:
Why the mom leave the son… The dog continues to linger on the other side of the SUV. She is trying to run it off while simultaneously getting the attention of the dog owner who is also in his driveway. She ends up going head to head with the dog, and also getting bit herself. Both the cat and the mom are bad-ass.

Dog’s Status: The dog will be euthanize.