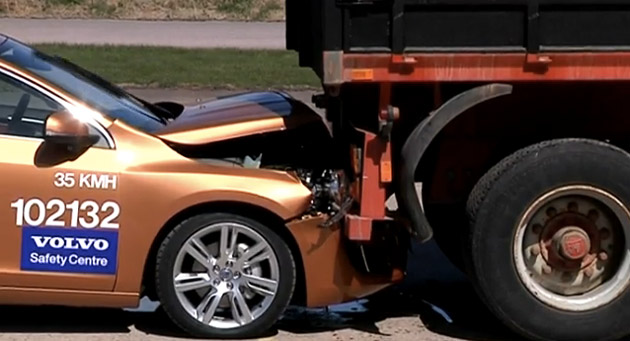 Safety is expected when you’re Volvo, and when something goes wrong it’s particularly embarrassing. Such was the case this week when media were invited to a demonstration of one of Volvo’s latest latest safety technologies. The collision warning system on the S60 is supposed to detect an impending impacts and then autonomously apply the brakes to bring the vehicle to a halt, like this. Except it didn’t!

The S60 was launched at 30 mph toward the back of a parked truck and the crowd watched as it rolled straight into it without ever braking. Volvo representatives later claimed human error in the preparation of the vehicle for the test. On the plus side, the car showed no apparent damage to the passenger compartment, again demonstrating that, even if a Volvo does crash, it will protect its occupants. In the meantime, we’ll just to go back to being active participants in the driving process.
Amidst chuckles from the crowd, the Volvo MC could only say, “So ladies and gentlemen, we’ve had some kind of mishap in the testing here. I apologize for that. This car actually contains collision avoidance technology obviously not demonstrated in this crash.”