The Longest-running Game in the History of Chess – EpidemicFun.com Skip to content 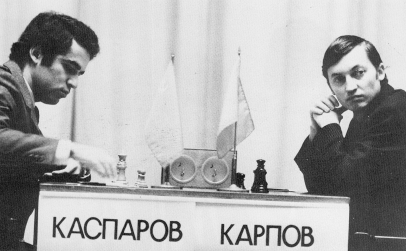 On this day, 9 September, 1984, a battle for the title of chess world champion began between Anatoly Karpov and Garry Kasparov. The match had a very controversial finish and set a record as the longest-running game in the history of chess.

At the time of the match, Karpov was the world champion at 33 years old, and his challenger Kasparov was only 21, but already a chess Grandmaster. The first player to win six games would win the championship, with no limit to the number of games. Karpov took the lead quickly, establishing a score of 4:0 on game nine, and claiming his fifth point on game 27. Just a single win separated him from defending his title, but on game 32, Kasparov beat Karpov for the first time. Another long series of draws followed and Kasparov won games 47 and 48, making the score 5:3. What happened next was the most unexpected turn.
On 15 February 1985, 160 days into the match, FIDE President Florencio Campomanes arrived in Moscow and called the match off, citing concerns about the health of the two players. During a press conference, Campomanes announced “I declare that the match is ended without decision. There will be a new match, which will start from scratch with the score at 0:0, on 1 September 1985.”
Both Karpov and Kasparov protested against the termination, claiming they were in position to continue with the game, however Campomanes refused to reverse his decision. From this point on the “no limit games” system was abolished and replaced with matches lasting a maximum 24 games. In the event of a 12:12 tie after 24 games, the reigning champion would retain his title.
Many saw political overtones in the match’s outcome. According to the common version, the Soviet government decided to save their favorite Karpov from defeat by pressuring the World Chess Federation to terminate the match. Considering that Karpov had lost 10 kilograms during the match, whereas Kasparov was in good health, some allege his physical condition might have prevented him from playing at his highest level and he was bound to be defeated in the end.
The match marked the first world championship out of five between the two Soviet players. The second match for the FIDE title between Karpov and Kasparov took place in 1985 in Moscow. Kasparov won by a score of 13:11. Karpov launched 3 unsuccessful challenges in the next 5 years, narrowly losing all 3 in one of the greatest rivalries the chess world has ever witnessed.
Karpov controversially regained the title in 1993 when Kasparov split from FIDE and attempted to start his own chess federation. Karpov defended his World Title against Kamsky in 1996 but conceded it in 1999 in protest over FIDE rule changes to the way the Title was decided. In 2007, Kasparov admitted that forming a breakaway organisation was the worst mistake of his career. The Title remained split for 13 years as Kasparov refused to rejoin FIDE. He lost the title to Kramnik in 2000.
The FIDE World Chess Championship 2006 reunified the titles, when Kramnik beat the FIDE World Champion Veselin Topalov and became the undisputed World Chess Champion. In September 2007, Viswanathan Anand from India became the next champion by winning a championship tournament. In October 2008, Anand retained his title, decisively winning the rematch against Kramnik.