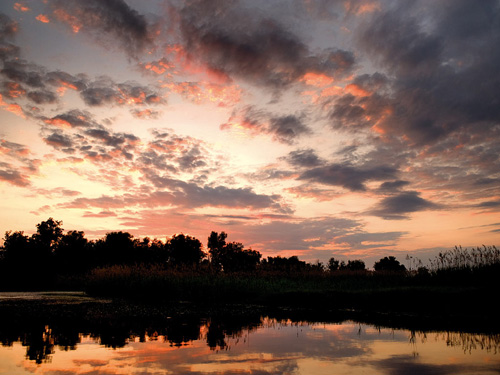 Kopacki rit Nature Park is situated in the northeastern part of the Republic of Croatia, i.e. on the wider geographical area of eastern Croatia. Geographically speaking, Kopacki rit is the flat part of Baranja, belonging to Osjecko-baranja County, mainly lowland situated between the Drava and Danube rivers and the state border with the Republic of Hungary. It stretches from the northern part of the Drava where the mouth of the Drava flows into the Danube and upstream on the left and right banks of the Danube towards the former Kazuk port. The state border towards the Republic of Serbia designated the Nature Park’s eastern border.

Kopacki rit is a floodplain that developed due to the activities of two large rivers, the Danube and the Drava. Significant flood areas exist in the northern, southern and western surrounding parts of the Nature park that stretch from Batina up north, to Bijelo Brdo down south and Donji Miholjac towards west. Geographically speaking, Kopacki rit covers the area between the 45° 32′ – 45° 47′ northern geographical latitude and 18° 45′ – 18° 59′ eastern geographical longitude. The altitudes of Baranja do not exceed 250 m, and the Nature Park is at the lowest altitude starting from only 78 m above sea level (the bottom of Kopacko Lake) to 86 m above sea level.

Bilje, Kopacevo, Vardarac, Lug, Grabovac, Knezevi Vinogradi, Suza, Zmajevac, Batina and Zlatna Greda settlements are all situated in the western and northern surrounding areas of the Nature Park on the margin of the former floodplain. Bilje has become a transitionally stronger urban settlement while the other settlements have remained rural.

Kopacki rit has a typical relief structure because of the river’s water activity and the floodwaters that flood the area. Rivers create banks and islands called “ade” and armbands called ‘dunavac’ or ‘old Drava’ in their live streams. On the other hand, the water in the floodplain deposits sediments in one place but deepens the ground in another, so the whole area obtains a specific undulate appearance. That is how ponds (depressions) and beams (higher grounds) were created and stretch hundreds of meters next to one another. Ponds and beams are narrow and long and have a specific curved appearance from the sky. The altitude difference between ponds and beams is 8 m. max. The ponds meet by the ends through a natural channel or so-called ‘fok’ and enter “Dunavac” or the Danube. The beams fill and empty the ponds. “Foks” were artificially deepened and the trenched canals took over the “foks” function.

This kind of pond and beam layout gives the area a unique appearance. The entire floodplain obtains a delta kind of look and is extremely exceptional because the Danube creates a so-called “inland delta” in its middle stream with the assistance of the Drava. A phenomenon like this is not notable for other European rivers in this form and therewith gives this area a global significance. If ever, Kopački rit shall be enrolled on the World Natural Heritage List having this phenomenon, because many other larger and more significant rivers in the world do not have it.

Kopacki rit was designated on the List of Ramsar areas in 1993. Protected areas on that List are protected under the Convention on Wetlands of International Importance, especially as a waterfowl habitat. The Convention was signed in a city called Ramsar (Iran) in 1971, (so called Ramsar Convention). Croatia is a full member under this Convention from 1991. Almost 1700 areas in the world have been designated on the List of Ramsar areas until today covering more than 150 million hectares.

Kopacki rit is also on the list of Important Bird Areas (IBAs). This program was developed by Birdlife International (a global association for bird protection; their habitat; and global bio-diversity that focuses people to the sustainable usage of natural resources) so to determine, supervise and protect the global network areas that are important habitats for birds and for the bio-diversity in general.

The partners in this association take full responsibility for the enforcement of the program on a national scale. More than 7500 areas in over 170 countries have been designated on the IBAs list from 2004.
Besides that, the Nature Park and Special Zoological Reserve were assigned as an area of international importance being part of the “Natura 2000 Networking Program”, so Kopacki rit will be a significant candidate to join this network when Croatia accesses the European Union.

An ecological network is a system of the most valuable areas for endangered species, habitats, ecological systems, and landscapes that are sufficiently close to each other and connected with corridors. This kind of system enables an interactive communication and species exchange. Parts of the Danube and Drava floodplains outside the Nature Park are also of international importance.