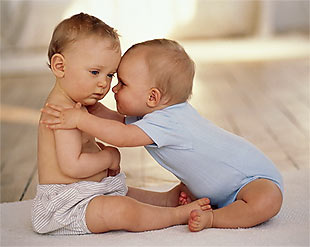 Many parent like to, or feel obliged to, honor a family member (such as a parent or grandparent) when naming their baby. This is a traditional way of choosing a name, and can work well. However, if it is something that you would rather not do, but feel obligated to do it, why not consider honoring the family member by using their name for the baby’s middle name? That way, you can select whatever first name you wish and still keep your relations happy. Bear in mind that, if you decide to go for a very popular name, the chances are that several of your child’s school friends in later life will have the same name.

What are the Top 10 Baby Names in the country?

Anthony is from the Roman family name Antonius. Commonly shortened to “Tony” in the English speaking world, Anthony is one of the most common male names in the U.S., Canada, Great Britain, and Australia.
Saint Anthony the Great was the father of Christian monasticism, and is invoked against skin complaints (including “St Anthony’s fire”). Saint Anthony of Padua is a Doctor of the Church, and is called upon to help locate lost items.
Bearers include actors Anthony Hopkins and Anthony Head, author Anthony Burgess, Flemish 17th century artist Anthony van Dyck, Victorian novelist Anthony Trollope and two British Prime Ministers – Anthony Eden and Anthony ‘Tony’ Blair.

There have been various queens named Isabella. Isabella of Castile laid the foundations for the unification of Spain, with her husband Ferdinand of Aragon. They reconquered Granada, and patronised Christopher Columbus on his first voyage to America. She was known as the ‘Catholic Queen’ due to her strong faith, and expulsion of Jews and Muslims from Spain – this was later known as the Spanish Inquisition.
Isabella of France was the wife of English king Edward II. Due to his ineffective leadership, she helped lead a successful invasion against him to put her son upon the throne.
Princess Isabella of Denmark, who was born in 2007, is the daughter of the Danish Crown Prince Frederik.
There are characters named Isabella in Shakespeare’s ‘Measure for Measure’, Jane Austen’s ‘Northanger Abbey’ and Emily Brontë’s ‘Wuthering Heights’.
Isabella Rossellini is an Italian actress.

Anglicised version of the Greek name Alexandros. Alexander appears in the Bible as the one who helps Jesus bear the cross on the journey to Calvary.
Alexander the Great was an ancient Macedon king. Greece was unified by his father, Philip II, but Alexander went on to extend the Macedon empire eastwards to the periphery of modern India.
There have also been two kings of Scotland named Alexander, and three emperors of Russia. Eight popes have been named Alexander. It is also the name of the first king of Yugoslavia and the current pretender to the throne.
Alexander Graham Bell was the inventor of the telephone, and Alexander Fleming discovered penicillin. The name was also borne by poet Alexander Pope, Russian author Alexander Pushkin, Russian composer Alexander Scriabin and former US Secretary of State under President Reagan, Alexander Haig.

Emma might be a form of Erma, a short form of various names which begin with the Germanic element Erm(en), Irm(en) which can mean ‘strong’ but is more literally translated as “whole” or “universal”. For some, it is a diminutive of Emmanuelle.
In Jane Austen’s novel “Emma” (1816), Emma Woodhouse was designed by Jane Austen to be a character that no-one but her would actually like. The movie “Clueless” (1995) starring Alicia Silverstone was based off of Austen’s classic novel.
Emma Bovary is the famous protagonist of French novelist Flaubert’s “Madame Bovary”.

In the Old Testament, Daniel was a Hebrew prophet and the Book of Daniel contains prophecies concerning the future. Daniel was among the Jews who were taken captive in Babylon. He rose to a high position in the Babylonian government by interpreting the king’s dreams. Daniel was persecuted by the Babylonians for his faith in God and survived a politically motivated death sentence in a lions’ den. Daniel was the sixth most popular boy’s name in the US in 2006, and the ninth most popular in the UK.

Jayden is a modern creation, perhaps inspired by the nickname Jay and the name Hayden. Some claim relation to the Hebrew name Jadon, but Jadon has no apparent etymological relation to the modern name Jaden/Jayden/etc.

In the Old Testament, Joshua was appointed by God to lead the Israelites after Moses’ death. The Greek form of Joshua is Jesus.
Joshua was the 3rd most popular boy’s name in the US in 2006, and 4th most popular in the UK.
Famous Joshuas include painter Joshua Reynolds, violinist Joshua Bell and White House Chief of Staff Joshua Bolten.
Joshua trees are found in south-west North America.

Ethan means strong and optimistic, solid and enduring, or permanent. The name Ethan appears eight times in the Hebrew Bible. Ethan the Ezrahite, is mentioned in the Hebrew Bible. It may be that Ethan was a cymbal-player in King David’s court. He authored Psalm 89. Charles Spurgeon theorized that this was the same person as Jeduthun. Ethan was the 4th most popular boy’s name in the US in 2006, and was ranked 19th in the UK.
The name Ethan has been borne by actor Ethan Hawke, and the character Ethan Hunt, played by Tom Cruise in the ‘Mission Impossible’ films. Ethan Allen was an American revolutionary, and leader of the Green Mountain Boys, a paramilitary organization formed during a dispute over land holdings in the modern state of Vermont. “Ethan Allen” is also a well-known brand of luxury furniture in the US.

Extended form of Micha, meaning “Who is like God?”.
Michael is the name of several characters in the Old Testament. It is most famously that of one of the archangels, the one closest to God, who has the responsability of carrying out God’s judgements. Michael is regarded as the leader of the heavenly host and is the patron saint of soldiers.
Michael was a popular name among many royal houses of Europe for centuries; this was also the name of nine Byzantine emperors and a czar of Russia.

In the Old Testament, Jacob is the son of Isaac and Rebekah, the twin brother of Esau and the father of twelve sons and a daughter. From his sons came the twelve tribes of Israel – the Israelites. God later changed Jacob’s name to Israel.
Other notable bearers of the name include sculptor Jacob Epstein, painter Jacob Lawrence, journalist and photographer Jacob Riis and actor Jacob Young. Jacob is also the name of a prominent character in the Twilight series of books written by Stephenie Meyer.
It is currently the most popular boys name in the USA.